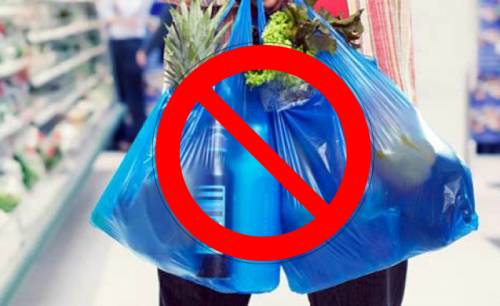 On Tuesday, the Nigeria’s house of representatives passed a bill banning the use and sale of plastic bags in the country. The bill states that anyone that fails to provide customers with paper bags in place of plastic ones risks three years in jail or a fine of N500,000 – or both at the worst case scenario.

As expected, concerns are being raised as to whether the planned ban on plastic bags is necessary and if it’s ever going to be feasible in a country like Nigeria. To put this in proper context, the United Nations estimates that up to 5 trillion single-use plastic bags are used worldwide every year. Can you then imagine Nigeria, the most populous black nation, without plastic bags? How is the trader down the street going to cope? Or the hawker in Lagos traffic?  A friend asked out of frustration: “Is this Nigeria’s greatest problem at the moment? These lawmakers don’t have anything else to do!” And hey, I totally get it.

BUT HERE IS WHERE THE PROBLEM LIES:

Limiting or prohibiting the use of plastic bag would have two major effects: Minimise the creation of waste, much of which ends up in the world’s oceans, harming wildlife, (the UN estimates our oceans could contain more plastic than fish by 2050)  and reduce the air pollution that comes with burning single-use plastics. Take note also that about 12 percent of most solid waste is made up of plastic of one kind or another, and around 40 percent go up in flames, according to a recent study.

The study found that when plastics are burnt, toxic gases like dioxins are released into the atmosphere, posing serious threat to vegetation, as well as human and animal health. How? Dioxins settle on crops and in waterways from where they eventually end up in your jollof rice you would eat and finally, in human bodies. The end game is that they are discovered to be potentially lethal organic pollutants that can cause cancer and disrupt thyroid and respiratory systems.

Secondly, phthalates, the very chemicals that give plastic their desirable qualities are associated with lots of health problems, including infertility issues, neonatal impacts on babies, allergies and asthma. According to the study, “burning of plastic waste increase the risk of heart disease, aggravates respiratory ailments such as asthma and damages the nervous system” in addition to releasing black carbon (soot), which contributes to climate change and air pollution.

Thirdly, because of their nature, producing plastics typically requires a lot of fossil-fuel-derived energy. The fact that the world uses up to 5 single-use plastics means millions of barrels of oil and natural gas go down for a convenient way to package a few goods.

In March, the United Nations Environment Assembly passed a resolution on “addressing single-use plastic products pollution,” in which it pointed out that “only nine per cent of the nine billion tonnes of plastics ever produced have been recycled” and that “by 2050 there will be around 12 billion metric tonnes of plastic litter in landfills and the environment.”

WHY THIS SHOULD CONCERN YOU

Waste is usually a major problem in countries and cities where the use of plastic bags are without any restriction. Lagos, for instance, is Nigeria’s commercial centre, but a large chunk of the city’s environment is a mess as a result of poor or non-existent waste management — from clogged drainage in highbrow areas like Lekki to refuse dumps sharing lanes with drivers in Ikeja. Because plastics are non-biodegradable, they are often burnt, exposing the 17.5 million residents in the city to health risks.

NIGERIA IS NOT ALONE

Bangladesh was the first country in the world to ban thinner plastic bags in 2002. Today, various types of similar bans — from partial to complete — have been instituted at various countries. In fact, as at July 2018, at least 127 nations have either banned or taxed plastic bags, according to a UN study. The European Union’s parliament already took steps to ban plastics by 202

Rwanda is a leading example when it comes to environmental sustainability. The country which placed a 2008 ban on non-biodegradable plastic, is aiming to be the world’s first plastic-free country. Its capital Kigali is dubbed Africa’s cleanest city, thanks to the ban and to a tradition in which people across the country commit time to projects aimed at improving the country’s public spaces every last Saturday of each month, in a mandatory practice called Umuganda. Of course we have such last Saturdays’ practice in Nigeria but how effective is it?

RECYCLING IS NOT AN OPTION

Recycling polyolefins – the most common type of plastic – has proven to be a challenge owing to collection and cleaning problems. Oxygen and heat cause chain damage during reprocessing.

A World Economic Forum (WEF) article shows that new findings are coming with advanced grades of polyolefins with enhanced strength and durability, but these grades cannot always mix with other ones during recycling. The major challenge perhaps is that polyolefins are often combined with other materials in multi-layer packaging, and while these constructs usually work just fine, they are impossible to recycle.

WHAT THEN ARE THE ALTERNATIVES?

Some of the credible alternatives to plastic bags as listed in this 2018 article include:

Paper bags: The house of representatives had also suggested paper bags which by the way are 100% biodegradable, recyclable, and reusable. They are also capable of withstanding more pressure or weight than plastic bags.

Canvas bags: Made of cotton, these are more durable than plastic bags  and can be washed regularly and reused as many times as possible.

Cotton bags: These bags are also more beneficial for the environment due to their re-usability and biodegradability. In addition, the raw material generates from farming the cotton which makes it renewable.

Jute bags: These too are also a good alternative to plastic bags for various reasons: They are strong, biodegradable and compostable.

WHAT MUST BE DONE

Critics are already pointing out the essentials lacking in the bill for it to become a law. For instance, there are concerns over the lack of enough alternatives to plastic bags; only paper bag was mentioned as an alternative. Paper bags too has its own lows so having it as the only alternative doesn’t address the problem squarely. Also, it appears there is no measure in place to ensure it would actually work: no provisions to ensure these alternatives would be in abundant supply when it becomes law, there is also no mention of enforcers such as the agencies that would be charged with the responsibility of seeing to it that citizens abide by the law.

This, however, does not dispute the fact that the bill is a step in the right direction and is long overdue. It is then hoped a final draft of the bill being sent to the president reflects all the essentials else it may end up not seeing the light of the day. That would mean another delay for such a key global action and more harm to human lives and our environment.